Many are aware of the famous song from Rodgers and Hammerstein’s “The Sound of Music” called “Do-Re-Mi”. The lyrics teach the solfege syllables by linking them with English homophones (words that are pronounced the same (or nearly the same) as another word but differ in meaning). It begins, “Do (Doe) a dear, a female dear. Re (Ray), a drop of golden sun. Mi (Me), a name I call myself.”, etc.

The 1959 show tune was a huge hit with me as a child, but sadly, the current generation doesn’t seem to know it. We shall attempt to remedy that – at least locally. Piano Guild Auditions have a musicianship phase called “Ear Training” in which first year students can earn a song credit, and thus a point, for singing the solfege from any given note. This is an excellent goal/skill for any piano student to attain.

I have here demonstrated the solfege in the Key of C, but it can be sung using any scale, and thus beginning on any given note. 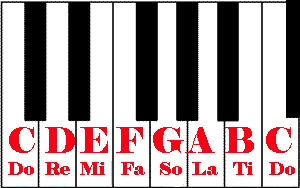 On a side note, one of my favorite authors, Douglas Adams, noted in his article “Unfinished Business of the Century” that, while each line of the lyric takes the name of a note from the sol-fa scale, and gives its meaning, when they hit “La” something went awry. Read on for his humorous thoughts:

“Well, it’s obvious what kind of line it is. It’s a placeholder. A placeholder is what a writer puts in when he can’t think of the right line or idea just at the moment, but he’d better put in something and come back and fix it later. So, I imagine that Oscar Hammerstein just bunged in a ‘a note to follow so’ and thought he’d have another look at it in the morning.

“Only when he came to have another look at it in the morning, he couldn’t come up with anything better. Or the next morning. Come on, he must have thought, this is simple. Isn’t it? ‘La… a something, something… what?’

“One can imagine rehearsals looming. Recording dates. Maybe he’d be able to fix it on the day. Maybe one of the cast would come up with the answer. But no. No one manages to fix it. And gradually a lame placeholder of a line became locked in place and is now formally part of the song, part of the movie, and so on.

“How difficult can it be? How about this for a suggestion? ‘La, a…, a…’ — well, I can’t think of one at the moment, but I think that if the whole world pulls together on this, we can crack it. And I think we shouldn’t let the century end with such a major popular song in such an embarrassing state of disarray.”

our anecdotes and activities